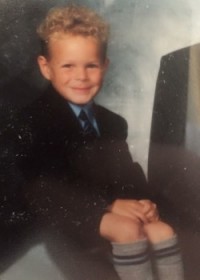 Kept Fit is delighted to announce ‘Member of the Month’ for March.

Adam was hesitant at first when coming down to Kept Fit due to a knee injury and was brought along by a friend.  After his first session he was hooked and joined within the week stating ‘the attention you get from the trainers is brilliant’.

He has since developed his knee strength and through regular conditioning training is now back to regular football training.  Adam has said he feels that his injured knee is now as strong, if not stronger, than his other knee!

Due to his injured knee Adam couldn’t join all the group training sessions but instead opted for guidance and help through his rehab until he felt strong enough to join in the group sessions which we tweaked slightly so to not aggravate his injury. Now Adam is taking part in all the sessions at different times of the day even when the friends who first brought him are probably still nice and sweetly tucked up in bed or putting their makeup on.

This determination to overcome injury and the mind-set of steel to never give up has not only earned him the title of Kept Fit’s second member of the month but it’s also taking Adam’s fitness to soaring new heights and we are really looking forward to seeing what more he is capable of.

Well done Adam from all of us at Kept Fit.